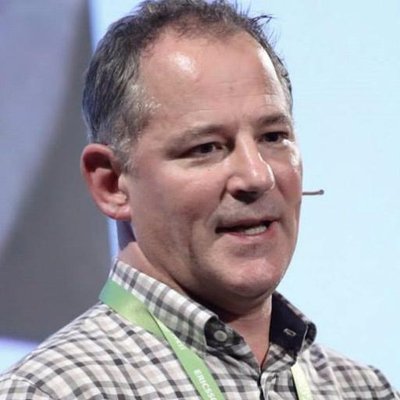 
Note: The video recording of the presentation can be accessed below, followed by a text-based version created from the transcript.


This is my favorite image from lockdown. It was taken from the village of Pathankot in northern India. 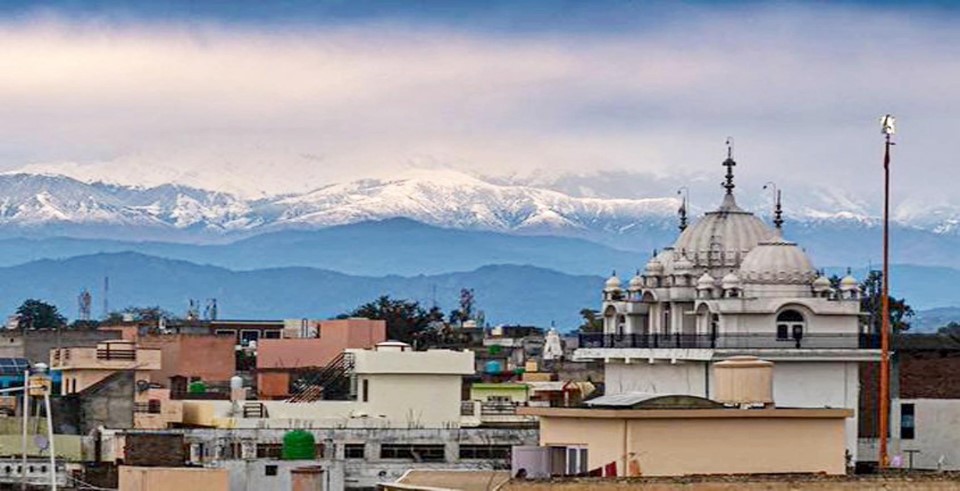 Despite the lockdown, more than half a million cases of coronavirus, and over 13,000 deaths in India, the people of Pathankot woke up that morning to a silver lining - they were able to see the Himalayan mountain range for the first time in 30 years, due to the decreased air pollution from reduced human activity.


When I read this article and saw this picture, I was reminded of the quote from Marcel Proust:


“The real voyage of discovery consists not in seeking new lands, but seeing with new eyes.”


I think when those residents of Pathankot got up that morning, in the middle of that crisis, they saw with new eyes. I think that is the opportunity that is in front of us right now.


In fact, I don't think it's merely an opportunity, I think it's a responsibility.


If over half a million people are going to die around the globe due to this virus, then don't we owe it to that loss that we see with new eyes, and that we actually seize an opportunity?


For me, the opportunity that we can seize as coaches and leaders is to accelerate the shift from what I would call the Industrial Age to the Social Age.

The Industrial Age vs. The Social Age


The irony of the picture above is that it's more than just a metaphor, because the pollution is a product of the industrial age - it's a legacy of that age. When it clears, it's telling us something: that age is passing and a new age is coming, a Social Age.


That social age will play by different rules of leadership, and I think we are at a turning point.


I'm hoping that this crisis accelerates that turning point, and we as executive coaches can continue to act as catalysts in that acceleration towards a future that is one we can be proud of.


The future I hope we're heading towards is one in which leaders can no longer trust in power; instead they must rely upon the power of trust. That's a quote from American author Charles Green of Trusted Advisor. My passion is for trust. That's what my not-for-profit, the Trusted Executive Foundation, focuses on: helping leaders build high trust cultures. 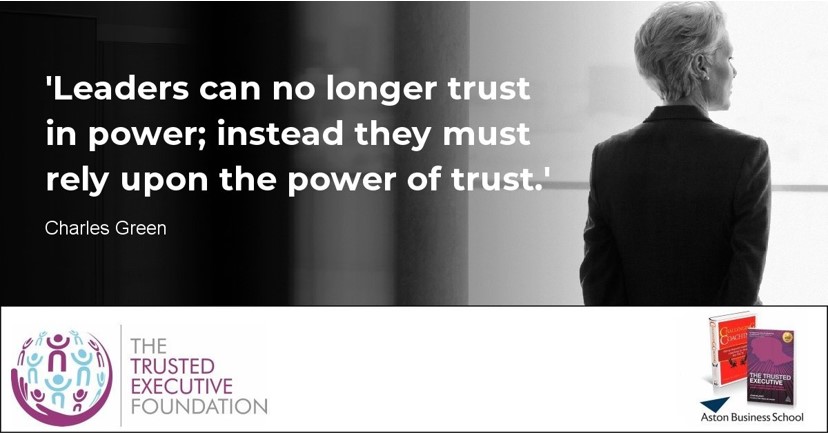 
More and more leaders are grappling with how they might make the transition from power-oriented leadership to trust-based leadership. My research and my book, The Trusted Executive, have been designed to help leaders that want to be part of that pioneering group.


Part of that challenge is to comprehend this shift intellectually, but a bigger part of the challenge is to incorporate it into the “muscle.” In other words, if we're going to rely on the power of trust, our leadership habits need to change from the habits of power to the habits of trust.


My research over the last six years has been directed towards those habits. I work with leaders who want to lead with trust, but sometimes don't know how to do that, because they are so deep in the industrial male Western conditioning that those habits are not even in their awareness of what they actually need to change.


As executive coaches, we can bring models and tools and techniques to help raise that awareness, and prompt the question, “What is it that I need to change if I want to be part of this future?”

The 9 Habits of a Trusted Leader


These are the nine habits of trust that have come out of my doctoral research at Aston Business School.

I can present this as a model that has been scientifically verified, so that in boardrooms it can withstand the rigor of assessment from CXO’s. 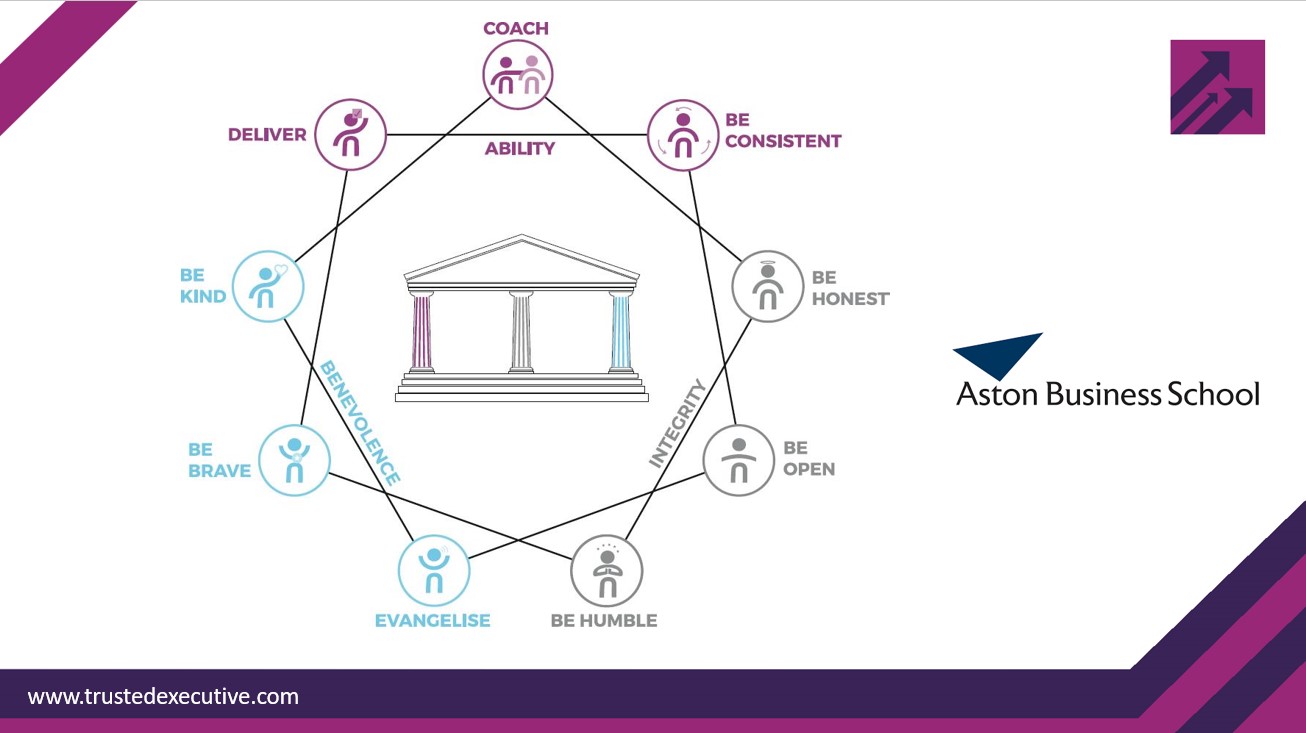 In my experience as a leader, the habits of Benevolence are probably the most alien to me as a leader.


I have never been on the course for senior leaders called, "Introduction to Benevolence." It's not something I've ever seen in a leadership competency framework in the last 25 years, but I'm convinced that I'm going to see it more and more in the future. I'm going to see words like “kindness” coming into the leadership mainstream, and I'm really looking forward to that. I'm hoping that this crisis is accelerating our understanding of why that's an important habit in leadership.

3 Applications for the Current Crisis


As we've used this model to coach leaders in the current crisis, there are three particular themes that have become apparent that I wanted to share with you as being (hopefully), particularly relevant to our coaching agendas at this time.


Forgive me, they are UK biased examples, but I hope that they will translate appropriately into whatever part of the world you happen to be in.


Right now, the first point relates to the habit of being brave, which is number eight in the model.


In the world of trust being brave is about moral bravery. It's not about physical bravery or personal bravery – it is moral bravery. This image shows a 22 year-old footballer with the Premiere League’s Manchester United football team in the UK, named Marcus Rushford. 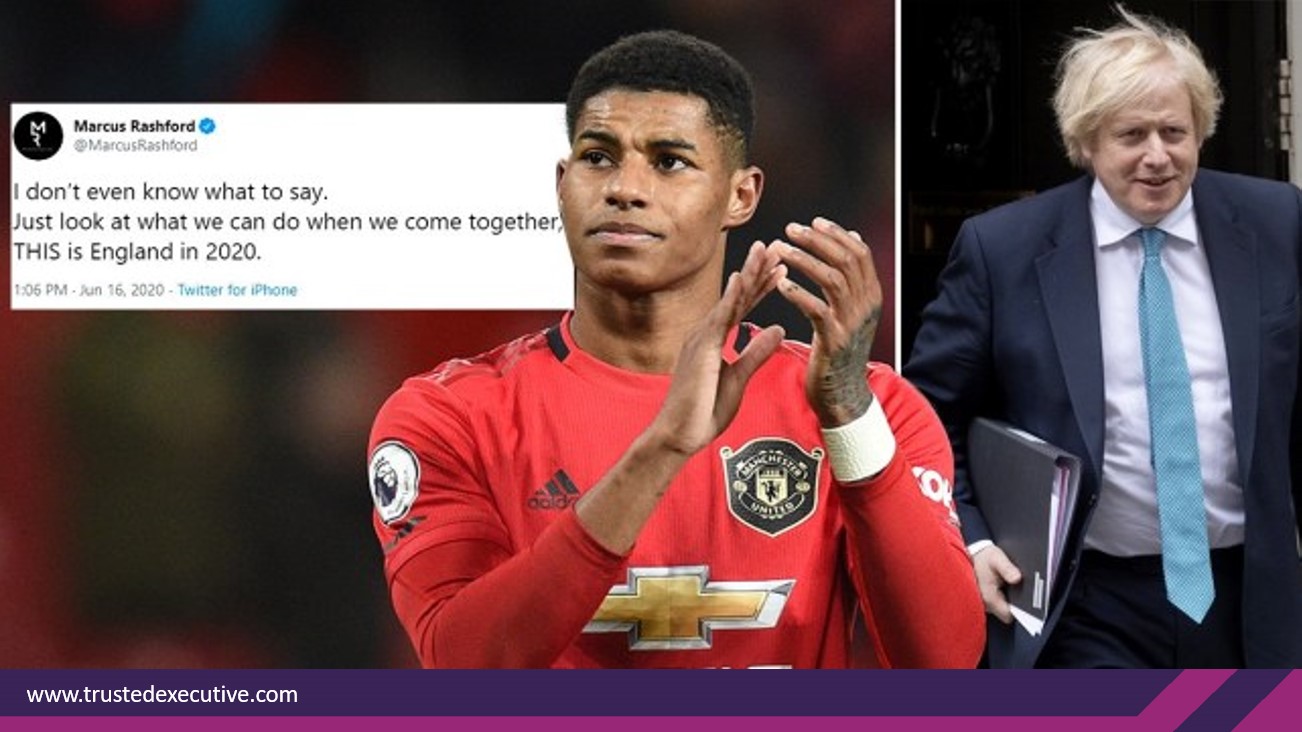 Marcus had the boldness and the moral bravery to write a letter to a number of Members of Parliament, including our Prime Minister, Boris Johnson, on the topic of child poverty in the middle of the lockdown.


In 24 hours, Marcus managed to achieve something more on that agenda than people have achieved over the last 10 years in this country.


It was an example of how the time is right for people to speak up, to raise these issues, and to believe that there's a different climate in which they will be heard. There's an increased hope of action.

When he got the agreement to the new policy of free child vouchers for children in poverty in this country, Marcus Tweeted,


“I don't even know what to say.
Just look at what we can do when we come together.
THIS is England in 2020”


This is the Social Age. We have to play by new rules, and in this time I think cultural renewal and moral bravery is something we feel is in the air. I think leaders – whether business leaders or leaders of other institutions - need to embrace the opportunity to be part of the solution (rather than part of the problem) of cultural renewal.


Many of the clients that we work with are achievers. They are sometimes overachievers. The thing that motivates achievers is achieving things, and in the current climate, a lot of achievers can't achieve what they want to achieve.


They feel out of control.


The 12-month plan has suddenly disappeared in a puff of smoke, and they're not getting the kicks that they normally do. They can't actually achieve and feel that sense of fulfillment from achievement, because this crisis is bigger than anything that they can influence or control. 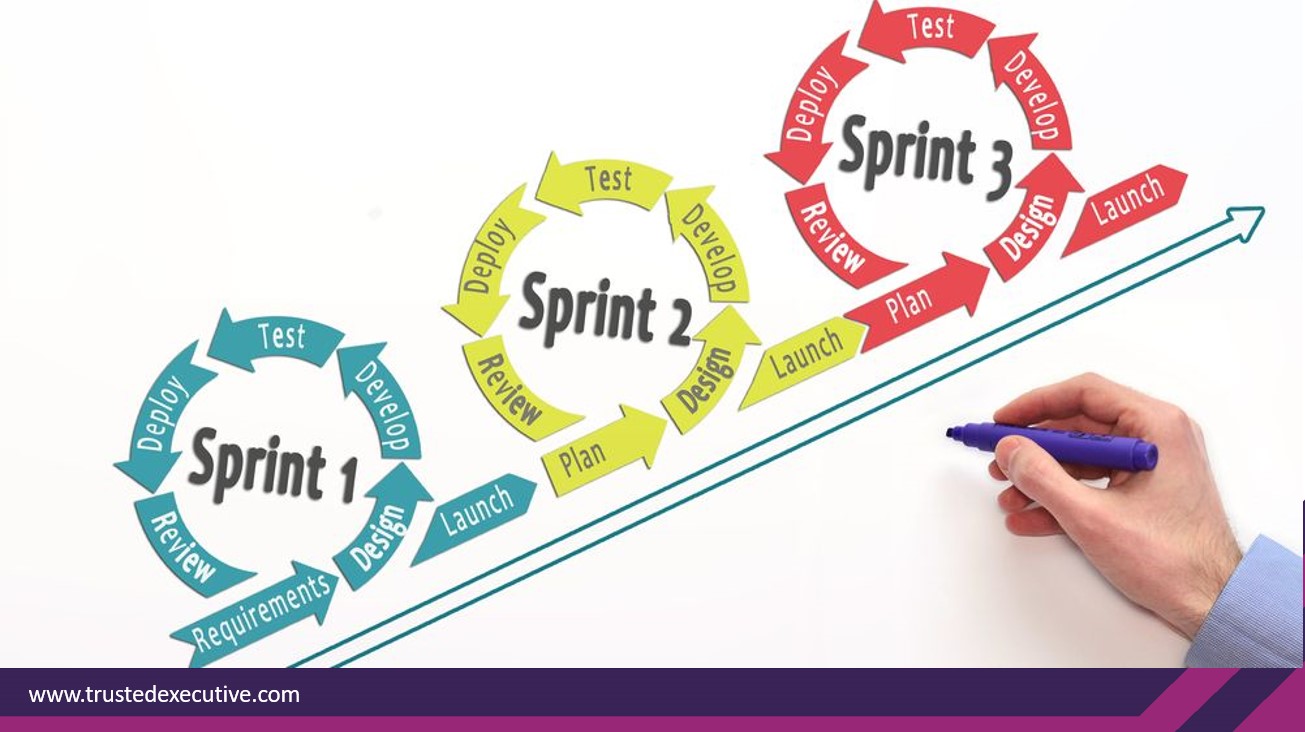 Thus, the theme related to Delivery is that we're finding the definition of success needs to be reframed and reinvented.


In particular, we're moving to a more agile model of 12-week sprints. This is as much time as people can look ahead with a reasonable degree of feeling they can control the outcomes and define success, and therefore define achievement.

We're increasingly working in this more agile delivery environment, so that's one of the questions that leaders are trying to work out: “How do I reinvent the Delivery challenge around the more agile model?”


My final theme comes from my experience of coaching in the world of sport.

One of the privileges I've had in my coaching career is to work with Olympic coaches and Olympic athletes. In particular, a number of the GB teams that went to the 2016 Olympics in Rio.

The biggest impact that working with sports people had on me as a coach was really around habit number seven in the model: Evangelize.

Evangelize - what does it mean? It means spread the good news.

Guy Kawasaki said in his book that, in the social age, evangelism is everyone's job, and to get the hearts of people on board is part of that spirit of evangelism.

This picture is of a rower called Allan Campbell, who I first met when he was 19 years old. He was an overweight, uncoordinated, novice scholar. 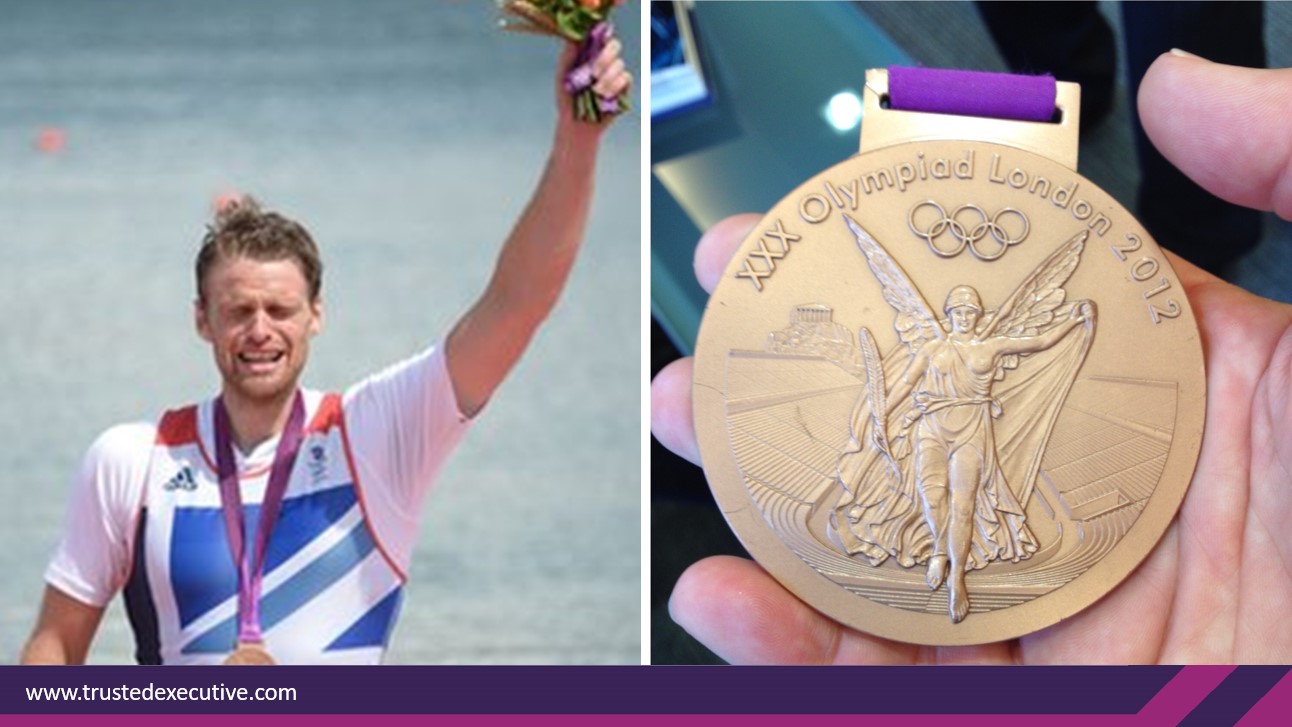 He declared this ambition, at the age of 19, to win a medal in the Olympics, which I thought was utterly absurd.


So did his coach, actually, who was who was an existing Olympian and my business partner, a guy called Bill Barry. However, I saw Bill and Alan go on this coaching journey over the next 10 years, and that is Alan’s bronze medal that I am holding, that he won by one foot from the Swedish rower in the 2012 Olympics.


I actually saw this with my own eyes and therefore, I can't dismiss it.


I think that this will be a habit that we're going to have to practice much more than we ever have done.


We need that inspiring vision, otherwise, people are going to give up. We need to know how to bounce back from disappointments and we need to love what we do.


We absolutely need to love what we do. We need that intrinsic motivation of loving what we do, because a lot of what we are trying to achieve might be snatched away from us at any moment by bigger forces and bigger changes that are going on in the world.


I see that as the third challenge.


The villages of Pathankot saw with new eyes.


As coaches, I think we can get around leaders at this time and help accelerate a yearning for a new currency of leadership in the world.


Some people call me a dreamer, but I'm not the only one.


I think we need dreamers right now to keep seeing with new eyes, and hopefully deliver some fruit from what has been an extremely difficult experience for people all around the world.

John Blakey is an Executive Coach with ECC, a sought-after international conference speaker, and author. He was designated as one of the top 100 thought leaders on Trust across America in 2016, and is the founder of The Trusted Executive Foundation. He is a proven entrepreneur and corporate business leader with a board-level track record in FTSE100 and Fast Track 100 organisations.


John is currently based in London, United Kingdom.